PRG’s Web Development Manager Ian Jarvis completed one of the toughest challenges of his life last weekend competing in a 100-mile foot race over the South Downs.

The SDW100 race travels along the chalk ridgeway, starting just outside of Winchester and heading due east until the trail ends in Eastbourne.

Ian has always been a keen runner, previously competing in many ultra-marathons, marathons and halves, but his SDW100 achievement is something we’re all very proud of at PRG.

Training for the SDW100 consisted of competing in two ultra-marathons, four marathons and one half-marathon

Here Ian gives his account of this remarkable achievement:

“As the alarm goes off at 4:15 on Saturday 10th June, I get out of bed and get myself sorted for what’s going to be (for me) a monumental day. I look out the window at the sun rise feeling elated.  The day is finally here; today is the day I complete my longest ultra-marathon to-date – a tremendous 100 miles!

“Starting in Winchester, the course traverses the South Downs Way all the way back to Eastbourne where you finish at the Sports College near Hampden Park. Having completed the qualifying distance of 50 miles in 2015, this was always to be an ambition of mine and one I was desperate to complete.

“Whilst I’d trained hard for six months, I’ve been running for many years. Training had certainly been tough in itself finding the fine balance between family, work and pounding out the miles. For me, running several days in a row seemed key; learning to run on tired, weary legs.

“Although many training guides recommended seriously high mileage runs, I simply couldn’t do this, plus it ran the risk of injury. So I took on at least one marathon per month in the build-up. I also aimed to complete the SDW50 in April which would be a good test. Unfortunately, that didn’t go to plan and I retired myself at mile 27 from dehydration. A very valuable lesson learnt and despite the bitter blow, was a lesson I needed in order to succeed at the 100. My final piece of training came just a few weeks before the 100 with a back-to-back marathon weekend. Something I’d never done before but proved mind over matter really is key.

“As I walked up to the start line, it was 5:30am and already pretty warm. The 6am start saw all starters do a full lap of the field before disappearing through a hedge and we were away!

“I’d been warned that over the course of time, you can expect lows and highs. The lows will pass you just have to stop the demon negative thoughts coming through. I have to say, I didn’t get these at all. Please don’t get me wrong, I’d struggled but this is a different feeling altogether.

“As the day progressed, I realised I’d made the rookie mistake of going off too quick – a total school boy error! The heat was picking up and I felt pretty tired already, not ideal when you’re only 15 miles in. I instantly switched to a quick walk, which gave me around 16.30 min mile pace. So I only had to run for 1.30 per mile to get my pace on to 4 miles per hour. This was then my plan for as long as possible.

“All was going well until my left knee started to become very painful. I was not being beaten, not today! I continued at my set pace and could still run but I had to be mindful of posture. At some point, the knee pain had gone and I was now over 50 miles and heading towards the checkpoint at mile 54 (Washington). The feeling of being closer to the finish than the start was a massive psychological boost.

“Then from nowhere, my left glute gave out and it became painful to jog or even walk quickly. I made it down to the checkpoint; also a bag drop was waiting for me. Changing in to fresh clothes, I had a bowl of pasta, grabbed some more fruit (I’d eaten fruit and jam sandwiches at every checkpoint) and used nuts which I’d carried for fuel. The pasta was heaven! I washed my hands and face to freshen up before heading on my way.

“Generally, every checkpoint was at the bottom of a hill, so it was a painful and stiff walk out of this one. I messaged my crew with a new estimated time of arrival to them of 16 hours. I don’t know how (probably tiredness) but by my maths, I was literally going to scrape in at the finish.

“I continued to power walk as much as possible, briefly chatting to other runners as I went. The temperature was now dropping (a welcome relief) and by the time I met my crew (an 1.25hr later than planned), it was now dark. I’d left with them some vital bits and bobs and a few treats. Chocolate milk is amazing after long runs so I had one waiting, as well as a can of deep freeze which I drenched my glute with. No time for dilly dallying, we got our lights on and between them, they kept me company through the night stint.

“The hills kept rolling, the blisters got worse and the chaffing had really kicked in. It was unbearable at times but I was now down to 16 miles until the finish – or for me, around 5 hours remaining. The sun was coming up and as we crest a major hill out of Southease, we had the sun rise on the left and the moon on the right – it was a spectacular view and one I won’t forget.

“I trudged on, aiming for the next checkpoint at Alfriston (91 miles in), at this point, I knew I was going to make it and within my original 28 hour time, I’d been so consistent. I was in fact on for a 27 hour finish. I was down to the final checkpoint at mile 95 at Jevington. I knew from here (having done this section many times), it was a massive hill, followed by the final decent and then the pavements of Eastbourne down to the finish.

“Whilst the uphill wasn’t much fun, seeing the finish line from the top was a huge relief! The next section was so painful due to the blisters and chaffing, it took me a while to complete the descent. This was it; I was now down to the final 1.5 miles. I was also on for bang on 27 hours. I now wanted to be under this, so I picked up the pace, it was going to be close but I was so close to the track.

“Once you enter the Sports College grounds, you have to complete a lap of the track before finishing and collecting your buckle. I’d said I wouldn’t be able to run it due to the pain, however, as soon as I hit the driveway into the Eastbourne Sports Park, I broke out into a trot and once I hit the track, gave it everything I had to run the final 400 metres. It felt never ending! However, I crossed the line, 100 miles done in 26 hours, 58 minutes (and 34 seconds).

“I did it; I was now finally a Centurion!” 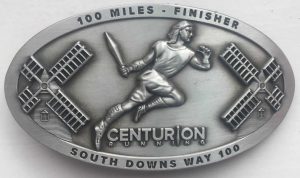 Many thanks to Stuart March Photography for kind permission to use some of the below imagery.